How the Pandemic Redraws Social Geography

The COVID-19 crisis has created a common global concern and a fight against an invisible enemy. But as it develops, the crisis points to a global reset. Power distribution around the world had become more diffuse before COVID-19 hit — that is news to nobody. But with the COVID-19 crisis, the deepening differences among classes and between rural and urban society are not only becoming more visible. They are restructuring human resources at an accelerated pace, and thus reshaping national strategies.

In the last chapter of my upcoming book, which will be released in Romanian later this year with a title that translates to Redrawing the World Map: Contemporary Geopolitics and Geoeconomics, I write about the social changes brought on by digitization. While they differ from place to place, they will eventually produce structural effects in all nation-states and throughout the global system. Social changes also reshape how we see the world, geopolitically. My argument refers to the way that resources change in meaning over time, depending on the ecosystem they are part of, and on that system’s geography and social patterns. This includes human resources.

I argue that globalization and access to digitization have made it possible for persons living in very different locations to consider themselves peers. In the process, people working from  laptops in their office, or independently from a private home or some coffee shop, have been uniting the urban zones of the world. I also argue that while the ‘urban’ begins to share common characteristics all over the world, rural areas will not only remain distinct from one country to the next, but will grow increasingly different from the urban centers in each nation. The social geography of the rural, considering the specific structure of each nation-state, will do much more to drive nation-states’ strategy than it has in the recent past. The urban setting is where states come to talk — it is a setting for mutual understanding. But the characteristics of a state’s rural reality — and its interconnections, similarities and tensions with rural counterparts elsewhere — will determine to what extent they cooperate with or oppose other nations.

What this means is that the human resource, and the settings in which it acts, will become more important to the state’s strategic imperatives — not less, no matter the promises of technology. Demographics matter because they are the core of society and because they are ever-changing, at distinct paces, within each society. I wrote the introduction of my book too early to consider the effects of the novel coronavirus on demographics and society overall — even if I acknowledged its potential for driving significant changes.

It is now that I am beginning to see what may come. As of this writing, the coronavirus has already brought Europe to a close. Extraordinary things are happening. Italy is in complete lockdown. Paris is quiet for the first time in history. Borders have resurrected: Checkpoints are back in use. Goods are allowed to move through them, while only citizens returning to their home countries may pass. Nation-states ban exports of essential medical equipment to fight the virus. In this crisis, EU member states have reasserted themselves as nation-states. They seek solutions in the nationalization of businesses, and the national military is called in to help.

There are several dimensions to discuss when talking about EU resilience to the COVID-19 crisis. For now, its power to coordinate is what makes the European Union relevant — the states administer borders and essential trade traffic, and health is a prerogative of the nation-state. Each country then determines how it will respond to the needs of the other. For now, the  European Union has suspended its stability pact, removing limits on national budget deficits so that capitals can spend what they deem appropriate for fighting the virus. After the crisis, the effectiveness of EU institutional moves to coordinate national actions will determine the future direction of the Union. The public perceives the European Union through what Brussels does to help. So, we will be able to judge the evolution of the European Union based on how it acts in front of its public.

Ultimately, the COVID-19 crisis will do much to shape the future of the European Union, and of societies around the world. We are all subject to so-called social distancing policies, which countries have imposed to fight contagion. Much has been said and written about how social distance will affect the economy, and especially the supply chain. The financial costs are known to be high as individuals choose to the best of their abilities whether to work or not. The question is whether the need to make a living will drive social unrest. Much has also been said about the way labor will change — there may be new standards for working from home for those who can. Opportunities may also be plentiful. Changes are as inevitable as they are unknown, including the potential for an economic crisis.

However, social distancing in practice affects more than one’s finances or working habits. It taps into a well of personal feelings, of which the most important is fear. You fear the virus, therefore you keep your distance. You don’t do that because someone told you to do so — you do it because you feel you should do it, for your own sake or that of those you love. It is personal, even if it is imposed. How much you fear getting sick with something that won’t necessarily kill you depends on the trust you have in the health system. The fear of getting sick along with many others depends on the trust in your country’s ability to cope with a situation where a lot of people get sick and are economically inactive. The two are very distinct matters — they are indeed distinct fears.

Anthropologists teach us that humanity has evolved in lockstep with its fears. It is those fears that create social changes. The geography people live in sets them up to fear different things and to respond differently to similar challenges. To use one example, geopolitics takes into consideration the difference of nations with a mountainous geography compared to those without one. They fear different things. Similarly in the COVID-19 crisis, the urban population, while more connected through digitization, lives in a much more enclosed environment and will respond differently to those living in villages and in rural areas.

People living in an urban setting have better access to medical services than those living in villages. A health system under pressure has a deep impact on an urban area — health systems tend to be much less developed in rural areas. True, differences exist between countries — the rural setting in Germany is different from that of France, with people having more access to medical facilities in Germany. But overall, medical care is much more accessible for the urban population than for the rural population. Similarly, the role of the state and its economic power are perceived differently in the two settings.

During the COVID-19 crisis, when considering the possibility that the medical system could be overloaded,  while also dealing with the closeness imposed by urban settings, the fear when living in an apartment can be intense. Acknowledging that you don’t have access to services you used to have access to means acknowledging some of your needs will not be met. And when social distancing includes quarantine, having to stay in — and filling in forms to be presented to local police authorities for a mundane activity such as walking your dog — will certainly affect your lifestyle and psychological state if it goes on for more than a few days. You can head to the balcony and sing, but the song itself is part of the fight against these negative effects.

In the process of social distancing, we are testing the links that bind social groups. The well-off person will behave differently than the poor, the young will react in a different way than the old. In a town, all groups have access to the very same services, but in an unequal manner. Observing the rush for food before or during quarantine will show anyone how divergent in both lifestyle and income urban people are. Their tolerance and their acceptance for the other doesn’t relate to their willingness to help. Psychological distance is the mirror of physical proximity. Living in an apartment doesn’t mean you talk to your neighbors outside of saying “hello.” Not talking disengages — you are too busy, but also, you need not know. This way, you have no responsibility to help what you don’t know needs help. The urban social network is that of class, and once in a class, in a group, relations to the other groups are minimal.

For the rural, things are different. There are groups in the villages, as there are influencers. But the network rules are different. It is the family ties that matter before the economic concepts. The links among persons are well established and tend to cross generations. When you are living in the countryside, you are generally more aware of geography and closeness than in the city. You know a lot of information about your neighbors because you need to deal with them on a more or less daily basis. The plots of land around the villagers’ houses don’t impose human distance, as neighbors are more obligated to help each other.. The state is largely not present. but belief in God is. Religion and family are key concepts for what forms the basis for trust in rural areas.

During the COVID-19 crisis, fears in rural areas are dependent on their connection to and their dependence on the cities. In this sense, the more distant they are, the less affected they get. However, considering how contagion spreads, once someone gets infected, the rural setting facilitates further spread. Imposing social distance in such communities is difficult — considering their poorer access to public health services, rural people consider themselves doomed from the very beginning. Outside of religious circles,  no one else has really helped before. They need not learn that medical services are available, because it is only in distant hospitals that they can in theory access such services. Digitization, when available, is only for communication with and learning about the rest of the world. Their reliance is on religious services and their own.

The COVID-19 crisis triggers different fears for different geographies. While digitization gives all people access to information, fear of the unknown — which includes not only the virus, but the methods chosen to address it –, accelerates the deepening in societal differences. While it is unknown how the European Union will come out of this new crisis, and while it is urgent that nation-states act and show they can fight the pandemic, it is clear that it will also affect the distance between the urban and the rural and that between social classes. In effect, the COVID-19 crisis is accelerating a process that was already happening, as fears create social changes affecting the structure of human resources everywhere on the globe. The urban reactions are similar across the globe, as are the problems they face. But the rural ones will be more distinct. 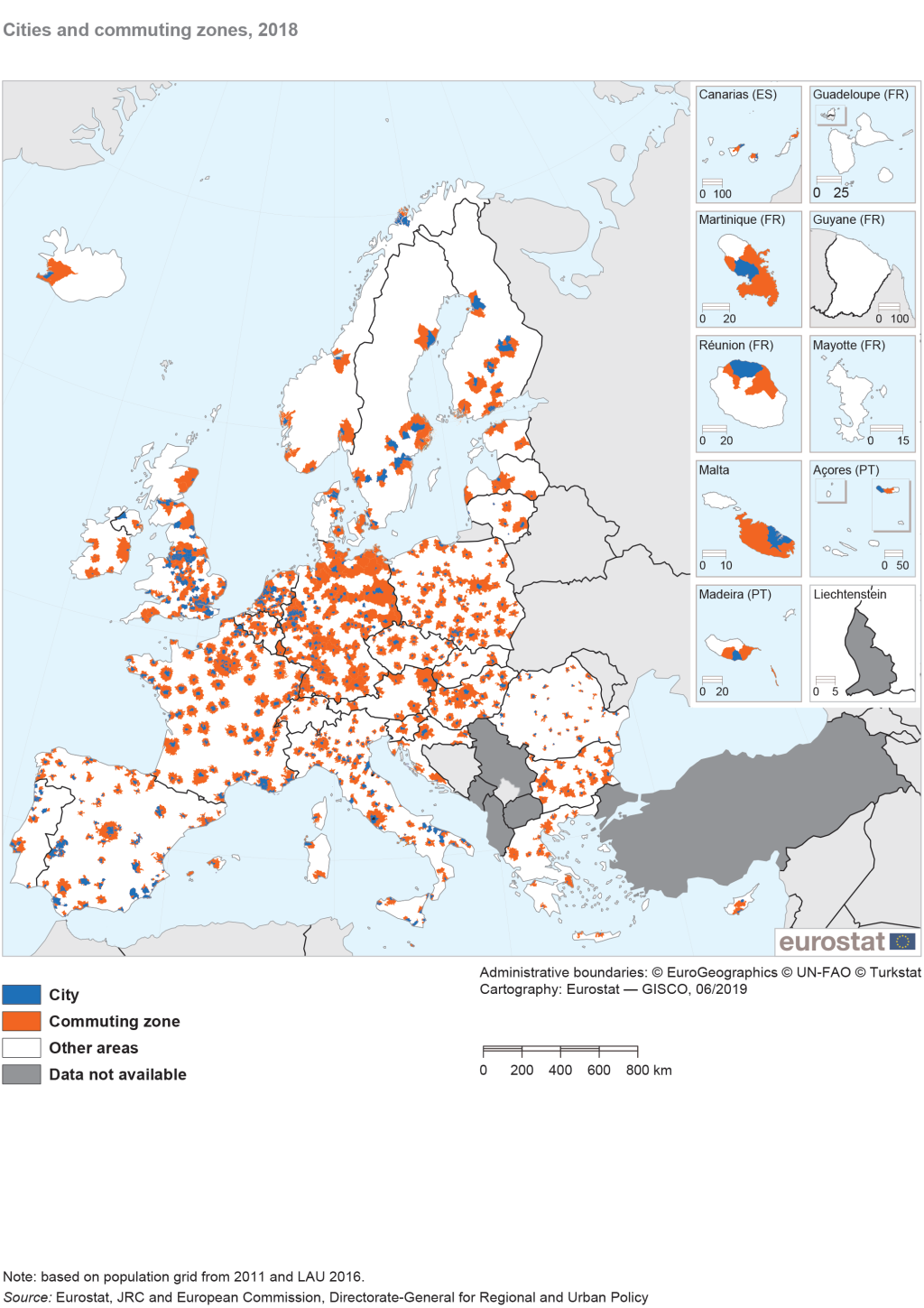