Eugene Chausovsky July 19, 2016
Like 0 Thanks! You've already liked this
The Election Season in the U.S.

After spending the night in Little Rock, I woke early the next morning and headed east on I-40 toward Memphis. After a few minutes of driving, I decided to get off the monotonous concrete slabs of the interstate and instead take the back roads of rural Arkansas. I turned onto 31, heading north for about 20 miles until I hit the small town of Beebe (pop. 7315). From there I swung northeast along 367 through even smaller towns like McRae and Garner, before turning east on 64 at Bald Knob and going through more tiny towns like Augusta and Earle.

Driving through these interestingly-named towns on Arkansas’ two-lane back roads, I felt like I could be traveling back in time – it was all farms and small but idyllic looking country houses. I passed by numerous Baptist churches, with the parking lots to each one of them filled with cars. This was, after all, a Sunday morning, and I was reminded that I was in the midst of the country’s Bible Belt. I drove slowly and took my time making my way through this picturesque part of rural Arkansas, with a big, blue sky hovering over lush, green fields. 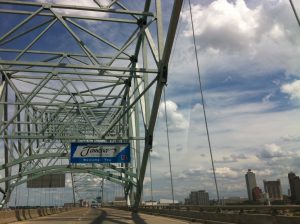 lly I got back on the interstate on I-40 as I approached the outskirts of Memphis, which sits on the extreme southwest corner of Tennessee near the border with eastern Arkansas. I drove on the Hernando de Soto bridge over the Mississippi River out of Arkansas and into Tennessee, with the skyline of Memphis – a city of 1.3 million people – sitting impressively on the eastern bank of the river. After exiting the highway I drove through downtown Memphis and pulled over to take a stroll along the mighty Mississippi.

I walked along the river and admired its dark blue and seemingly endlessly wide banks, feeling a certain sense of pride and patriotism that reminded me that – despite being born outside the US and having spent a decent share of my adult life outside of the country – I am more American than anything else. The Mississippi River is one of the iconic geographic features and cultural symbols of the US, an important source of America’s agriculture and economic power and inspiration for American literary classics like Mark Twain’s Tom Sawyer and Huckleberry Finn.

The city of Memphis, too, is a place of considerable historical importance in the US. Founded in 1819 as the US was expanding westward, Memphis became a vital transport center due to its flood-free location high up on the banks of the Mississippi. Like much of the South, Memphis saw a major influx of slaves in the first half of the 19th century, driven by its cotton-based economy. Today, Memphis remains predominantly an African American city – 63% Black, 39% White, and about 7% Hispanic.

It is this diverse population that gives Memphis its distinct culture, with the city holding a key place in both the civil rights movement and in the development of music and arts that would spread across the country. At the Rock’N’Soul Museum near the city’s iconic Beale St, I would read about how the working conditions under the hot Southern sun created the atmosphere conducive to Memphis’ rise as haven for blues, soul, and country music. BB King, Elvis, and Johnny Cash all got their start in Memphis, and many bands can be seen effortlessly cranking out blues on Beale St seven days a week. 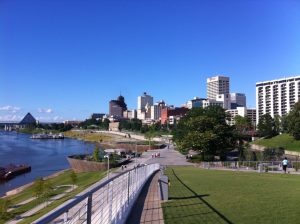 Only a few blocks from Beale St is the Lorraine Motel, where Martin Luther King Jr was shot and killed in 1968. The motel now houses the National Civil Rights Museum, which includes impressively detailed displays and powerful videos of the history of African Americans’ struggles in the US from the beginnings of slavery through the civil rights movement of the 50’s and 60’s. This is a struggle that still persists to this day, only the struggle has transformed from one over political rights to issues like police brutality and high rates of incarceration for African Americans. The struggle can also be seen in the large gap in most socioeconomic indicators between whites and blacks in the US. According to the 2014 US Census Bureau, the median black household income of $35,400 was little more than half the $60,250 median household income for whites, while the black poverty rate was 26.2%, almost three times the white poverty rate of 10.1%.

Of course, economic inequality can be found throughout the world, but in global rankings the US consistently ranks near the top of the income inequality list among the developed world. This socioeconomic gap was plainly evident in Memphis, where nice neighborhoods lined with hipster coffee shops, yoga studios, and gourmet restaurants could be found just a few minutes drive from very poor-looking neighborhoods filled with run-down pawn shops and liquor stores. I couldn’t help but notice that the vast majority of people found in the nicer neighborhoods were white, while the poorer neighborhoods were predominantly black. This dichotomy reminded me of South Africa, where black townships in cities like Cape Town and Johannesburg were a world apart economically from upscale white neighborhoods, yet geographically quite close to them.

However, it would be misleading to paint a picture of Memphis as a city that is literally divided between black and white. The few days I was in Memphis, I used Airbnb to rent a room in a condo owned by a black man in his late 20s. He had grown up in Natchez, Mississippi, went to university in Atlanta, and now had a good job working as an engineer at a Mitsubishi transformer plant in Memphis. One evening, upon my temporary roommate’s recommendation, I went to an outdoor concert held on a weekly basis over the summer known as ‘Blues Tuesday on Overton Square.’ There I listened to a racially diverse band play blues music in front of an equally diverse crowd in a recently revitalized neighborhood in the Midtown area of central Memphis. I watched as people of all colors, ages, and sizes sat in lawn-chairs and enjoyed the concert. I spotted one smartly-dressed family of four which had the appearance of being solidly in the middle class – a black father, white mother, and two mixed teenage children – as they sat next to each other but didn’t pay much attention to the concert, every one of them engrossed in their smartphones.

Nevertheless, it was hard to deny the existence of a race and income gap in the city on a broader level, and this socioeconomic disparity was a topic I wanted to explore further. In the local paper, The Memphis News, I had come across an article on economic development in the city and decided to reach out to the journalist who wrote it. I asked her if she would be willing to speak with me about the economic situation in Memphis, and fortunately she agreed. In our conversation, she told me that there was actually a feeling of optimism about the city’s economy, with Memphis experiencing “more development and construction projects now than in a generation.” She said that were was particularly confidence in the city’s real estate sector, and rent increases were occurring across virtually all sectors. 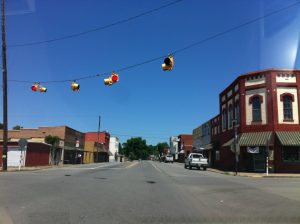 This came as a bit of a surprise to me, and I mentioned that parts of the city looked like they were not particularly dynamic, which is to say they were outright bleak. She admitted that Memphis has its “lion’s share of economic disparity”, adding that the city was “founded on racial inequality and that still persists.” She said there had been an exodus of businesses out of downtown Memphis, with banks and law firms moving to the eastern side of town. However, she said that there were efforts to get businesses back into the downtown area, with one of the biggest news items recently being Servicemaster’s plans to relocate its headquarters from East Memphis to a giant shuttered mall in downtown. She added that, though parts of the city were certainly facing economic hardship, there was a “healthy amount of community development at the neighborhood level.”

I was curious about such community development efforts, and so I reached out to the city’s Community Development Council (CDC) to speak with someone about them. I was able to get a meeting with one of the council’s directors, a friendly and engaging man in his early 40s. He told me that CDC’s mission was to build capacity among community development organisations throughout the city. It did so by supporting neighbourhood-level organisations in areas like asset mapping and training for HR practices and board development, and worked mainly in the fields of public housing, social service delivery, and economic development in low-income minority neighbourhoods.

When I asked what kind of challenges the CDC runs up against in its work, he immediately said “Funding, which has been in steady decline.” He said that the financial resources granted from the state and federal government simply weren’t enough to meet the rising challenges of population growth in low-income communities, but added that “churches and faith-based foundations are very active and supportive” in community development efforts. Still, he said that “no neighborhood has completely turned things around,” and when it comes to supplying public housing for low-to-moderate income families, the scale of impact is only in the dozens of houses per year.

This got me thinking. In his North American travelogue book An Empire Wilderness, Robert Kaplan writes that “civil societies are hollow if they do not care for their most needy citizens”, adding that “no true descendant of the Enlightenment could justify leaving inner cities as they are.” Kaplan references Aristotle, who wrote that the “real difference between democracy and oligarchy is that democracy is to the advantage of the populace at large, while oligarchy is to the advantage of the rich.” With income inequality rates high and only growing in the country, it is perhaps no coincidence that a candidate like Trump – who has been lauded by his supporters for financing his own campaign and not taking money from wealthy donors and corporations, while pledging to bring jobs back from overseas – has resonated with so many people.

Eugene Chausovsky is a Non-Resident Fellow with the Center for Global Policy. He previously served as Senior Eurasia Analyst at the geopolitical analysis firm Stratfor for more than 10 years. His work focuses on political, economic and security issues pertaining to Russia, Eurasia, and the Middle East. Mr. Chausovsky lectures on the geopolitics of Central Asia at the U.S. Department of State’s Foreign Service Institute. He has contributed articles to a wide range of outlets including EurasiaNet, Business New Europe, Center for Strategic Studies, Caucasus Journal of International Affairs, Forbes, Wall Street Journal, Euractiv, Business Insider, RealClearWorld, and The Diplomat. Chausovsky has given interviews to global media outlets such as CNBC, Bloomberg, Fox News, Al Jazeera, and CGTN and delivered client briefings to numerous international organizations and businesses, including Fortune 500 companies. Chausovsky was born in Moscow and his lived in Ukraine, Austria, Italy, Brazil, and the US.
The Election Season in the U.S.

The Power of Charisma